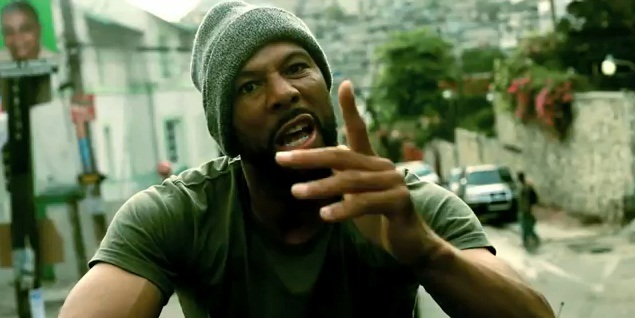 Come April 17th, We’ll All Have Something In Common

Lonnie Rashid Lynn, more frequently known to the masses by his stage name Common, is anything but what his name suggests. Earning notoriety for his extensive discography, film presence, and altruistic community involvement, Lynn has established himself as a leading voice among both proletariats and American royalty (I’m looking at you, Michelle Obama). Common’s lyricism could move even the most conservative grandmother to a state of tears, and not because she’s upset by the naughty rhetoric. I know we all remember Kanye’s infamous inquiry, “are you into astrology, cause um, I’m trying to make it to Uranus.” It is this kind of legendary silliness that makes one want to redeem their music taste with a little Mozart, something to clear the palate. However, Common’s influence changes the rap game completely, spewing out Pinterest worthy rhymes in his eloquent, resonant tone. With that said, it is with great humility and excitement that MUSIC Matters invites Lonnie Lynn to our hallowed halls, leaving Hill Auditorium’s track record just a little more impressive than before.

It takes a minimal amount of Twitter scrolling in which one can gather that Common’s voice in society is one of advancement, whether it is for the african american community, our nation’s youth, or even respect for LGBTQIA identity. Also, that man takes admirably casual selfies, accentuating that notable bald head of his. On the regular, one can note Common’s genuine efforts to contribute to the lives of his fans, from answering late night questionnaires from the eager Common devotee (Lonnie really likes corn!!!), or visiting Chicago public schools’ students to commemorate academic excellence. In 2007, Common spoke out against the use of homophobic references plaguing the music industry, vowing to protest against them, openly regretting previous offensive lyrics. This step forward has had a monumental impact, encouraging other artists to follow suit. As 2011 rolled around, despite extensive protestations from our nation’s spokespeople, Common attended a poetry reading at the White House, standing up for the legitimacy and strength of rap music in being considered poetic. Fox News pulled a classic move, denoting Common’s artistry as being “vile,” but the indestructible Lonnie Lynn forgot the haters and continued to represent the musical poetry that has granted him his credibility, his poise, and his career.

In terms of music, Common is a rapper through and through, from his phresh street style to his lyrical excellence. He usually rhymes over jazzy, neo-soul beats that complement his smooth flow nicely. Common’s influences include Questlove, D’Angelo, and the late J Dilla, among other musical icons he collaborated with in the collective Soulquarians. Although he’s still scoreless on the MTV Video Music Awards, he won a Grammy for “Love of My Life” and another for “Southside” with Kanye West. Four of his last five albums have been nominated for Best Rap Album, including what many consider to be his greatest work to date, Be. More recently, he won the Academy Award for Best Original Song with his inspirational anthem “Glory.”

Common is one of the most socially conscious rappers in this cut-throat business. But don’t get me wrong, he brings more heat to the stage than any amount of Fireball could.  His shows have an intimate atmosphere that make you feel as if there are only ten other people in the room, creating an unbeatable energy in his connection to spectators.. Common has also established himself as a Denzel-esque actor, bringing that same expressive quality to performances. It’s easy to tell the man can act because his showmanship is exceptional. Don’t pass up the chance to see this hip-hop legend.

Now that you’ve taken the precious procrastination time out of your busy college schedules, here is the long story short. Common has built up an acclaimed reputation, giving him the immortality that most artists fail to achieve. Whether or not he could have done this through musical talent alone, his presence in cinema, politics, and the simple elegance of his personality deem him to go down in the rap history books. Following the boisterous festivities of MUSIC Matters’ annual Springfest on April 17th, make your way on over to Hill Auditorium for the concert experience of a lifetime, ladies and gentlemen. There is an excellent range of ticket prices, catering to everyone from the baller on a budget to Bill Gates, selling at the MUTO ticket office in the union or via le internet:  http://michiganmusicmatters.com/tix. Spoiler alert: we hear Harbaugh is going to be in attendance. If that isn’t reason enough, let this quote, in the words of Common himself, simmer in your mind for the evening: “Realness is an act that you cannot rehearse.” *Common drops mic*